At a time when the International Monetary Fund (IMF) has forecast a slide in India’s economic growth to 4.8% for 2019-2020, we face a looming job crisis and the highest unemployment rates in 45 years, India chose to snub Jeff Bezos. The same man who founded the world’s largest online marketplace, AI (artificial intellgence) assistance-provider, and cloud computing platform, creating millions of direct and indirect jobs, in the process.

Commerce minister Piyush Goyal hit out at Mr Bezos, when he was in India recently, saying: “They (Amazon) may have put in a billion dollars, but if they make a loss of a billion dollars every year, then jolly well they have to finance that billion dollars.” The prime minister (PM) and his Cabinet also did not meet Mr Bezos, who announced a fresh US$1 billion investment in India and committed to exporting US$10 billion worth of made-in-India goods by 2025, in a slowing economy.

Piyush Goyal’s churlishness with his first comment made even diehard supporters cringe. He then made it worse with a clarification: “So, I cannot create 700,000 jobs by breaking the law, breaking every anti-competitive restriction, monopolising certain markets, causing millions of jobs to be potentially lost, incurring huge losses, which I am bound to, of course finance, and bring in foreign direct investment (FDI) and then claiming that I have a right.”

What is the Indian government’s problem with Mr Bezos? Protests and placards by members of a retail traders’ association seem to suggest that Amazon is responsible for our economic mess, when it is forever pumping resources into making people spend and consume more.

Just ahead of Mr Bezos’s visit, the Competition Commission of India (CCI) opened up an inquiry into unfair trade practices by Amazon and other e-commerce giants. This, along with Mr Goyal’s outburst and the optics of a retail traders (close to the government) holding street protests, almost seems like coordinated action. Is government suddenly concerned about retailers being undercut by the cash burn and discounts offered by VC (venture capital)-funded e-tailers? Why wasn’t this concern visible when traders and the whole economy was mauled by badly implemented demonetisation of currency and hastily rolled out goods and services tax (GST)?

It is far more likely that an over-sensitive government wanted Mr Bezos to rein-in The Washington Post’s criticism of the Modi government by threatening action and inquiry. A tweet by Dr Vijay Chauthiwale of the Bharatiya Janata party (BJP) gave the game away. 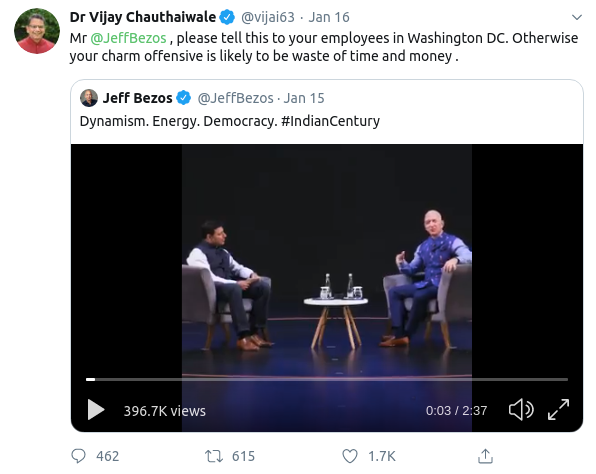 It is nobody’s case that Amazon or other e-commerce giants are paragons or should be allowed to break the law and kill competition. But, when the commerce minister makes serious allegations against a global giant promising big investment and job creation in India, it must be backed by hard evidence and data. Let’s examine Mr Goyal’s charge in some detail.

‘Breaking the Law’ and ‘Claiming I Have a Right’: The BJP’s stand on big retail has flip-flopped as per convenience. The same political party, which blocked an entire session of parliament on this issue, did an about-turn after 2014. Since then, it has had a wink-wink attitude on Amazon and Flipkart claiming to be ‘marketplaces’ and ‘haats’ while their advertising said the opposite—Amazon’s tag line is ‘apni dukaan’.

Assisted by a battery of international lawyers and global precedents, major e-tailers have, indeed, taken full advantage of India’s regulatory gaps. They also know how to cosy up to bureaucrats and policy-makers in multiple ways, but mainly by employing their progeny.

In 2017, at a panel discussion on World Consumer Rights Day, Amazon’s country head brazenly refused to accept responsibility for fake and counterfeit products on its platform. The secretary, ministry of consumer affairs, moderated the discussion and did not initiate any investigation. In fact, Amazon agreed to recall and replace the counterfeit products sold by one of its merchants, only after a consumer organisation launched a social media campaign.

Amazon’s India country head stunned consumer activists at the gathering with the brazen claim that Amazon could not be held responsible for allowing fakes to be sold from its platform, because the government does not allow it to be a direct retailer and it can only operate as an online marketplace. Consequently, it had no control over products in its pipeline, beyond preliminary checks. He went on to demand that Unilever, whose product was under discussion, get a court order to stop it from enlisting counterfeiters as suppliers.

Remember, this was 2017. Why is a Union minister still resorting to allegations rather than action against rule-breakers three years later? Was there a cosy nexus, until media criticism of India’s policies mounted?

Counterfeiting is rampant in products like shoes, perfumes and cosmetics. Even companies are forced to litigate because there is no action from the government. Skechers, a popular US shoe brand, took Flipkart to court over sale of counterfeits, which eventually led to a raid on stockists. Hindustan Unilever recently took Snapdeal and Club Factory to court on the same issue.
It was only in November 2019 that Amazon launched ‘project zero’ an effort to block counterfeits, while Flipkart makes similar claims – but problems persist. So, if Amazon’s top brass in India behaved as though they ‘have a right’ but no responsibility to consumers, it is the government that signalled they could do this.
Breaking Every Anti-competition Restriction: It was only in February 2019, that the government really tightened e-commerce rules to bar large online marketers, like Amazon and Flipkart, from selling products of companies in which they have a stake and mandated companies to sell products exclusively from their platform. It also directed them to maintain a level playing field and not influence the sale price of goods and services on their platform, either directly or indirectly, and ensure that cash-backs provided by them are non-discriminatory.

This action was entirely due to the effort of the Swadeshi Jagran Manch (SJM). Interestingly, SJM’s submissions to the government were based on Flipkart’s averments before the income-tax appellate tribunal (ITAT) in Bengaluru about how the e-tailer was subverting rules. Interestingly, the ITAT order was in favour of Flipkart, but its submissions helped SJM make the point that the heavy cash-burn by e-tailers would potentially drive brick-and-mortar competitors out of business.

If we accept that disruption of traditional business, through technology and VC funding, is something that the world is dealing with, then we need to examine, based on data and facts, whether India will benefit by moving with the times or regress.

SJM’s says it is not against e-commerce, but wants fair competition. In an ideal world, this is the obvious way to grow; but we are in a global marketplace where VCs pump money to build value only on the likelihood of big market share and rapid increase in valuation. There are plenty of small retailers, who may want to sell on-line without losses or cash-burn, but will not get a rupee of funding. Does the government have a workable alternative to offer? Or will we drive away VCs and e-commerce and push India back to a closed, high-cost, low-consumption economy with perpetual shortages that we lived with for decades? Has anyone calculated the impact on ‘Start Up India’ and the whole tech ecosystem and jobs?

We must also factor in the fact that hugely funded companies, like Amazon, Walmart and Alibaba, have the resources to build massive supply chains, logistics and warehousing, or can launch a fleet of electric vehicles with low-carbon emission or build robots to deliver. Global studies have shown that consumers today want convenience and will pay for it up to a point. But lower costs only come with scale.

Monopolising Certain Markets and Causing Millions of Jobs To Be Potentially Lost: I have not been able to find any comparative data on whether Amazon, Flipkart, Snapdeal and others have created jobs or killed them. Simple evidence shows that e-commerce has grown the logistics and warehousing business enormously and created tens of thousands of jobs across India, where selling pakoras may have been the only option that this government has to offer. Most of these employees are proud owners of two-wheelers and the effect of their consumption has been felt across sectors (finance companies, mobile phones, televisions, etc). Small retailers, who the government is batting for, are notorious for exploiting labour. Without hard numbers, their allegations, being echoed by a ranking-holding chartered accountant politician, hold no ground.

As for the monopoly allegation, let’s remember that e-commerce players themselves face intense competition and get acquired rapidly, once they create value. A couple of days ago, Zomato acquired Uber Eats. Amazon alone employs 70,000 people, has 550,000 sellers in India and has partnered with 20,000 kirana stores for last-mile deliveries. This is replicated by other e-commerce companies. As against this, we do not have any credible numbers about the number of retail business that have shut down because of e-commerce giants. There are also hidden benefits like a different class of employment to women (delivery and sewing bags for packaging) and building logistics to reach remote locations such as Leh and Majuli.

The biggest players are themselves operating in an intensely competitive market. Amazon has Walmart-Flipkart snapping at its heels and, internationally, it is ranged against the powerful Alibaba which has both funding and markets. Disruption of brick-and-mortar businesses is happening all over the world. Hopefully, the government and CCI will examine all aspects of action, gets some facts and numbers on the table and ensure fair rules that work for consumers, manufacturers and sellers in a modern world.

Otherwise, hasty action and mindless regulation based on mere allegations can destroy a $40 billion e-commerce industry and push India even further down the economic slope.

Why You Need Accounts Receivable Software in Your Company

How to become a Government e-Marketplace (GEM) Seller

Many Indian Traders to Shut Shop in Amid Covid Lockdown: CAIT – weprocessit.in

Weprocessit blog values your privacy. In order to understand how people use our site generally, and to create more valuable experiences for you, we may collect data about your use of this site (both directly and through our partners). By continuing to use this site, you are agreeing to the use of that data.